Senior volleyball girls are finally back to playing 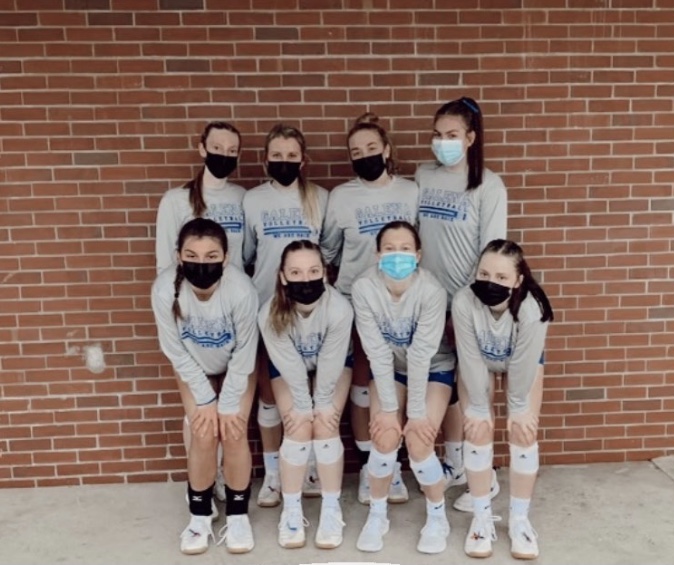 Senior girls are excited for the season to continue! Corrina Noble '21 says, "We’re all here to play and have fun and so far that’s exactly what we’re doing and we plan to keep it that way." The girls are happy they have the opportunity to have a season, and are ready to take advantage of it.

There have been many athletes that have been waiting for the final decisions on whether they are able to play or not. Many players have had high hopes while times have not been easy. The majority of these players include the seniors who have truly been waiting for their time to shine this volleyball season. This year there are eight seniors which are Grace Wilhelm, Corrina Noble, Kellyn Romer, Kate Moran, Sydney Benson, Riley Wills, Abby Soppe, and Kylie Brown. These seniors have had three games so far to start off the season, and in each game they continue to persevere through and show the strength they have been meaning to show.

There are many differences between this year’s volleyball season and last year’s. The coronavirus has really struck athletes and their ability to have a time to play against other schools. “Things are different because we don’t have the same locker room pump ups we used to do, student sections, or postseason. There is a lot that we’re going to have to get used to, but I am just glad that we’re able to play together again!” says Abby Soppe ‘21. Although there are things to get used to, the players are staying positive under the circumstances.

The Galena Pirates started their season off with a game against West Carroll at home. “I think overall we are doing well, even with the few practices we have had. We are working extremely well together. Yesterday’s game was a good match and a good win for our first game!” says Sydney Benson ‘21.

All freshman, junior varsity and varsity teams won each set leading them to the first win of the season. “I think we all did okay last night, but we all definitely have room to improve. I’m ready to have a season with everyone for one last ride, and show everyone what we got,” says senior Kellyn Romer.

It is important to take into consideration that there has been quite a big time gap between the last time these ladies played, and to give them the recognition they deserve for the win that they managed to receive.

Some of the players were worried that they might not have been as good as they have been in the past, but they also plan on working as best as they can together to keep up the reputation of Galena Volleyball. “Overall I think this year is going to be good,” says Riley Wills ‘21. “We try our best to work well together, and we all just want to have a good time while winning at the same time.”

Other players plan to improve from what the team was like in the past. “I think that we all get along pretty well and communicate well, that’s something that the team maybe struggled with last year. We’re all here to play and have fun and so far that’s exactly what we’re doing and we plan to keep it that way,” says senior Corrina Noble.

All players have been doing what they can with the amazing characteristics that give them the sportsmanship that is very needed in other teams.

The senior girls are ready to tackle on more games and take on every chance they can get to play with their teammates. “I am so excited to finally be back on the court with the girls I have played with since primary school. It’s go go go from here and we’re ready!” says Kate Moran ‘21.

There are also other players that have the same mindset. “I think we all agree that we miss the typical game environment, but everyone is looking forward to making this season a good one!” says Grace Wilhelm ‘21.

An optimistic attitude is always the way to go when it comes to adjusting to the differences that have been facing these athletes. “Its really exciting to be back on the court since this year has been full of unknowns, and we didn’t know if we would even get to have a season,” says Kylie Brown ‘21. “It may be shorter than usual, but I am beyond thankful that I get to make more memories on the court one last time.”

The girls are excited to see what the rest of their volleyball careers hold, and hope that the season runs as smoothly as it can go. If you are interested in viewing the games, you are able to view home games on Youtube by searching Galena Stream and view away games through the NFHS Network. We wish the seniors and the rest of the team the best of luck for the season!