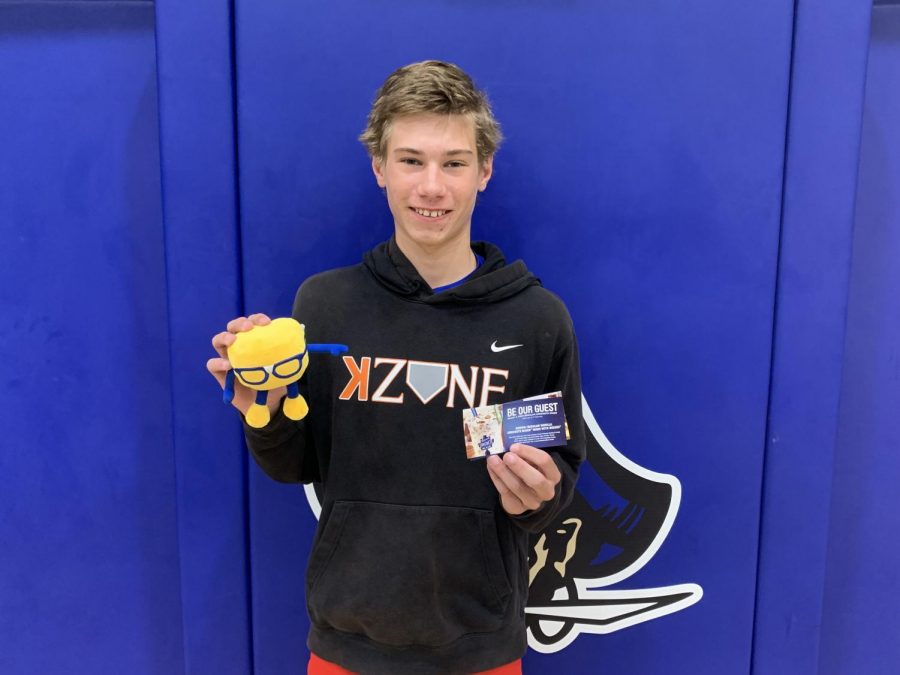 Pirate Competitor of the Week
8th grade football player Roman Romer is this week’s Pirate Competitor of the Week sponsored by Galena Culver’s and the Galena Gazette. Roman had a great game at quarterback in leading the 8th grade football team to a 22-0 victory at rival Stockton last Tuesday.  According to coach Tyler Sincock, “Roman had a high completion percentage, including a long TD pass. He also had a couple nice QB runs and even caught a long pass on a trick play.  He is a great team leader and works hard in practice everyday to improve.  Roman was honored with a gift basket from the Galena Culver’s, as well as a newspaper courtesy of the Galena Gazette.

Also Nominated:
Senior football player Julian Garcia had a big presence on defense Friday night as the PIrates picked up their second win of the season 28-14 over Stockton. Julian had 19 tackles and a pass break up on a PAT attempt. He also made some key tackles as the defense came up with back to back goal line stands in the 3rd quarter. Julian also contributed with 9 carries for 32 yards and had a couple of deep kickoffs. According to coach Ed Freed, “It is great to see Julian having a great season. He contributes in all phases of the games and has worked very hard to improve himself in the off-season and has become a leader on our team.”

8th grade football player Owen Hefel was a standout on both sides of the ball in a big 22-0 victory over Stockton this week.  He had one long TD run and a number of other great runs.  Coach Tyler Sincock praised his efforts, saying “Owen’s versatility is also an advantage as he can play both tailback and fullback and does a great job blocking.  He also made a handful of outstanding 1 on 1 tackles in space from his outside linebacker position.”

7th grade volleyball player Olivia Hillard. had 13 aces and 14 assists in three games last week. Coach Emily Rowe commented, “Olivia does a great job by seeing the court and identifying the open/weak spots. She plays smart and has made improvements every single game.”

7th grade volleyball player Leah Heller was nominated by coach Emily Rowe who offered, “Leah is a natural leader on and off the volleyball court. Her words of encouragement and motivation to her teammates does not go unnoticed. Between our 3 games last week, Leah had 9 aces, 10 kills and 1 block. In our game vs. Belmont, she served 9 aces and had 3 kills.”

8th Grade volleyball player Jalyn Walker was nominated by coach Kailyn Stumpf, “Jalyn has proved to be an asset to our team. Not only is she determined to learn and grow, but she brings a positive energy to our team. Jalyn is always cheering on her teammates, which makes her a true team player. We had two wins this week: Lena (2-1) and Belmont (2-1).”