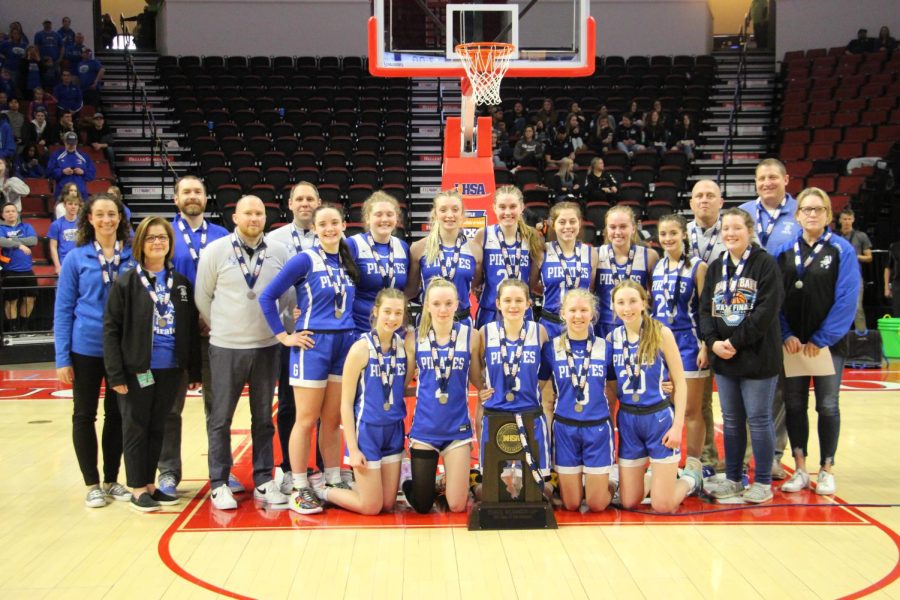 After the IHSA state tournament on Saturday, March 5, the Galena Girls Basketball team ended their season with a history making record of 32 wins and 4 losses. This year’s basketball season was immensely different for the Lady Pirates. They have had to overcome many challenges, but they continued to work together. At the beginning of the season, the team consisted of 9 JV players and 10 varsity players. As the season progressed, the program no longer had enough numbers to carry a JV team, but all of the players, JV and varsity, came together to form one of the strongest teams Galena High School has ever had.

After the IHSA state tournament on Saturday, March 5, the Galena Girls Basketball team ended their season with a history making record of 32 wins and 4 losses. This year’s basketball season was immensely different for the Lady Pirates. They have had to overcome many challenges, but they continued to work together. At the beginning of the season, the team consisted of 9 JV players and 10 varsity players. As the season progressed, the program no longer had enough numbers to carry a JV team, but all of the players, JV and varsity, came together to form one of the strongest teams Galena High School has ever had.

The Lady Pirates were loaded with talent this year, despite their low numbers. Gracie Furlong ‘25, Addie Hefel ‘24, and Taylor Burcham ‘24 have all stepped up, even though they are some of the youngest girls on the team.

“Going into the season we all knew it was going to be very special, we knew we had all the aspects we needed to make it far,” said G. Furlong ‘25. “Being a freshman can definitely be very scary, but I needed to focus on my game.” Gracie Furlong never let her nerves get the best of her. Through the season, she gained confidence and looked comfortable on the court; evenly matched with older, more experienced players. This confidence allowed her to be a large asset to the team.

Multiple other players including Burcham, Maggie Furlong ‘22, Claire Martensen ‘22, and Hannah Lacey ‘25 have made a big impact within the program as well. They brought great energy and solid fundamental skills to be leaders on and off the court.

“This season was different for me because of our great success,” said Lacey. “All the girls were super accepting and had made me feel like a part of the team for more than just this season. They never once made me feel like I didn’t belong here and I couldn’t be more thankful for that.”

After an impressive regular season, the team finished with a 27-3 record and the NUIC Conference Champion Title. The first ranked team then advanced to the IHSA Regional, where they played Fulton in the first round on February 14. They later went on to play Eastland on February 17, in the championship, to clinch the regional plaque. “It was great to win regionals,” said head coach Jamie Watson. “But I knew we needed to shift our focus and put in the work necessary to reach our goals.”

The Lady Pirates advanced to the IHSA Sectional tournament in Forreston, where they took a big victory over Aquin Catholic. “After winning the first round of sectionals and going into the championship everyone was so happy and proud of how far the team had come,” said Sydney Einsweiler ‘22. “We just had to continue to play game by game.”

On February 24, the girls competed in a riveting game against Stockton in the sectional championship. M. Furlong ‘22 won the tip-off to begin the game, and the girls continued to perform from there. They secured a huge win 46-38 and were able to come home with the sectional champions title.
Sophomore Hefel had a strong showing in this game. She scored 23 points in the victory over their rivals. During the season, Hefel has been averaging 11.8 points per game, a feat which earned her a nomination as TH Athlete of the Week on February 28. “Being nominated felt like an amazing achievement. It definitely added some boosted spirits to the team especially heading into super sectionals,” said Hefel. “The basketball team is largely different this year, we are so young. I don’t believe there has been a year with three underclassmen starting. We all get along so well on and off the court, age doesn’t bother us at all.”

For the first time since 2017 the Galena Pirates Girls Basketball Program competed in the Super Sectional tournament.

On February 28, the Pirate community traveled to Hoffman Estates where the team took on Chicago Hope Academy, winning 55-25. “The excitement that filled the building after the final buzzer rang was unexplainable” said Maddy Glasgow ‘22 “The Galena Lady Pirates were headed to state!” This was the first Galena girls’ basketball team ever to make it this far, it was history in the making.

On Thursday, March 3, the town of Galena followed the Pirates to Redbird Arena where they competed in the IHSA state semifinal. “Walking into Redbird for the first time was surreal. It was such a cool experience,” said Burcham. “Being able to look up in the stands and see everyone from the town supporting our team was an amazing feeling.”

The team crushed sixth-ranked Serena in a 58-31 win. The floor was dominated by blue, Martenson led the Pirates with 14, G. Furlong had 13, Hefel scored 10, Burcham 9, and M. Furlong added 8 points to the final score.

Along with their unstoppable offense, their defense is what makes Galena a one-of-a-kind team.

The Pirates continued to stay consistent with their strong play and were able to secure their spot in the Illinois Class 1A state championship game. This game was record-breaking not only in the eyes of Pirate fans but also in IHSA history. They broke two records, one being zero points allowed in a quarter, as well as the fewest points ever allowed in a half. “The exhilaration that I was feeling after the semi game was undeniable,” said Martensen. “I was extremely proud of my team because we were advancing to the championship, and I was also very pleased with my individual performance!”

After an impressive performance in the semifinal game, the Lady Pirates prepared to play the biggest game of their lives. They were up against the top-ranked Brimfield Indians. For the first three quarters on Saturday, March 5, Galena was the higher-level team. They demonstrated their prominent defense, which often opened up offensive opportunities.

The Lady Pirates went into the half with a 14-11 lead, and they opened up the third quarter with a 7-0 run. After leading the first three-quarters, the fourth quarter went back and forth between the two strong teams.

The Indians responded to the Pirate’s strong play, with a strong press defense forcing Galena to give up some crucial turnovers. The game was tied up 31-31, and with 2 seconds remaining Brimfield took the free-throw line. Brimfield’s Elynn Peterson sank one of the two free throws which ultimately guaranteed them the state championship trophy.

“Obviously, it didn’t end the way we wanted it to, but this group of girls that are sitting up here with me is some of the best that I’ve ever played with, on and off the court,” said Maggie Furlong ‘22. “Just to be able to make history not only at our school but in the state this weekend, is phenomenal.”

The Galena Lady Pirates proudly finished as the IHSA Class 1A State Runner-Up. They were able to bring home another big trophy that means so much to so many people. In addition to the team’s accomplishments, G. Furlong and Hefel were both named to both the Associated Press and Illinois Basketball Coaches Association All-State Girls Basketball Teams. G. Furlong, to the IBCA 1st Team and AP 2nd Team, and Hefel to the IBCA 3rd Team and AP Honorable Mention Team. Also, a large majority of the team was named to different aspects of the NUIC-West All-Conference Team.

Although there was a different outcome than the Pirates wanted, their community couldn’t be more proud. “I went through a series of feelings much like what one goes through if someone is mourning someone close; shock, anger, and then acceptance,” said principal Mrs. Murphy. “Once I was able to accept it, my heart was bursting with pride.”

The girls were welcomed home with the fire trucks escorting them all the way from Stockton, and a large parade of cars on the highway. “Coming home to so many people was amazing,” said Avery Engle ‘22. “We could genuinely feel the love and support that we had behind us during our entire journey.” The unforgettable experience came to a close at the Galena Middle School where a pep rally was held. The coaches and players took the time to speak and thank everyone.

Even though this experience is over, this Galena girls basketball team will never be forgotten for its indelible and inspiring season.